The Vale Douzaine is looking for new douzeniers because two of its experienced members are standing down after giving years of valuable voluntary service to the parish.

The official notice convening an election was published last week and anyone interested in serving their parish has until 4pm next Monday to complete and return a nomination form, which is available from the Vale Douzaine Room.

Those standing down are Andre Goubert and Stuart Le Maitre and Senior Constable Richard Leale said he hoped parishioners would consider putting their names forward to seek election.

Opportunity
"This is an opportunity to help shape the direction of the parish and to enter public service," he said. "It is very easy for people to complain from the sidelines, but by standing anyone interested in parish affairs has a chance to influence policies and parochial direction."

The election itself will take place on Wednesday 6 November at 7.30pm at the Vale Douzaine Room and there are some other items on the agenda (below) for discussion. 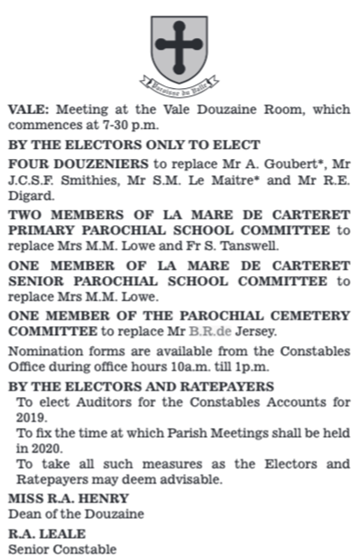