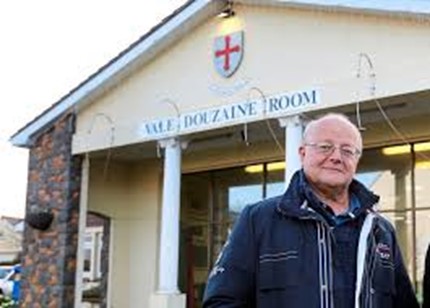 More than 1,200 householders in the Vale have yet to pay their parish rates – and the deadline is on Friday.
The reminder has been issued because anyone in arrears faces being fined, something the Douzaine always seeks to avoid having to do.
Rates can be paid online, Senior Constable Richard Leale, picture above, said after the office revealed that 1,281 households have yet to clear their bills out of the 4,697 sent out.

'Some people think they can only pay in person or by sending in a cheque and that's not the case,' he said.

'In fact, parishioners can do so over the phone, when we will take a card payment, or they can do so through their own online banking facility or mobile app,' he said.

To do so, parishioners simply needed to follow their own bank's instructions for setting up a new payee and enter the Vale Parish's sort code – 30-93-73 – and the parish account number – 02422523.

The only other thing needed, which he stressed was vital, was the parochial rates invoice number, found at the top of the bill sent out to all parishioners in the post. Without that, matching up the payment to the household was extremely difficult.

£25 a month late payment penalty
Mr Leale said that failure to pay on time meant parishioners were liable to a fine of £25 a month or 10% of the amount outstanding, at the discretion of the Constables.

'Obviously, the last thing we want to do is impose a penalty but we have an obligation to collect all rates due otherwise we cannot maintain and provide parish services. And if some people don't pay, that means we would end up having to charge everyone else more, which clearly wouldn't be fair.'

He was issuing the 'online' payment reminder because feedback suggested many people were't aware it was an option open to them.

While the Constables would like to redesign the rates bill posted out to make the payment options clearer, the official document was templated and identical across all parishes, so any change had to be approved by all 10 of them, which made it a complex and lengthy process.

'Nevertheless, we are aware many, many people pay their household bills online and I just wanted to reassure Vale residents that they can pay their rates that way too.'