Details of a planning application that could enable the extraction of up to 4.1 million tonnes of stone from Chouet headland in three phases have been published and Vale parishioners have until August 17 to make representations to the planning service about the proposal. 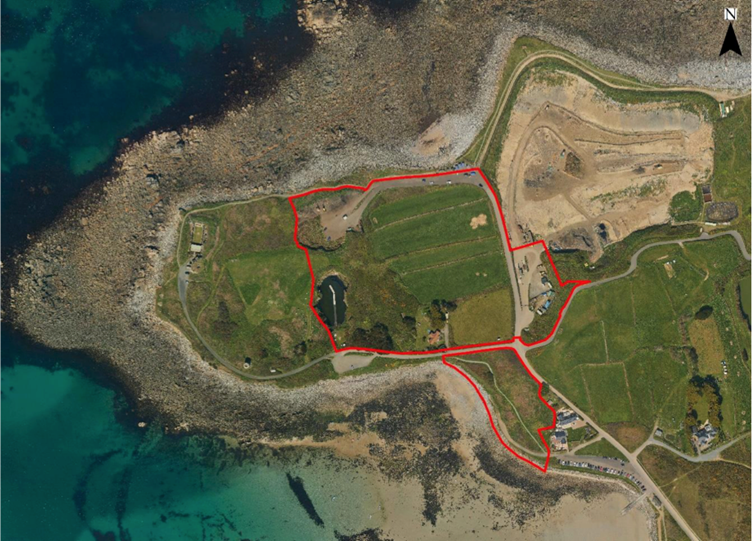 The application site based on aerial imagery.

The application follows the States agreeing last autumn to support on-island stone extraction to provide for the future supply of aggregate for Guernsey and the imminent closure of Les Vardes. Papers submitted by Ronez say that reserves at Les Vardes are sufficient for two years – but can only be worked after the processing plant and coated roadstone (asphalt) plant there has been dismantled and a replacement plant located elsewhere.

At this stage, the planning application addresses in detail the first two phases, which would release 1.15Mt of reserves. The final phase is addressed in outline and would be the subject of further review in about 10 years to establish whether on-island quarrying remains the most appropriate method of supplying aggregate for Guernsey at that time.

Proposed Development
The planning application is for a new quarry at Chouet Headland to replace Les Vardes Quarry. Overall, the proposals could release some 4.1 Mt of high-quality granite over three phases. Initially, the quarry workings at Chouet would be a satellite operation to Les Vardes Quarry. Extracted granite would undergo limited crushing to make the material more suitable for transporting to Les Vardes Quarry for further processing to produce a range of aggregates using the established plant.

The first phase would involve removing some 432,000t of granite from an extraction area of around 2.3 hectares following the removal of soils and overburden. In addition, ancillary developments include siting a mobile primary crusher (pictured below) and screen within an old quarry, the use of the weighbridge and infrastructure associated with the Mont Cuet landfill site and the creation of a landscaped screen mound to the south of the proposed quarry workings along with other landscape planting works around the periphery of the working area, as well as off site adjacent to Les Hures.

Phase two
The second phase, which would start after reserves at Les Vardes Quarry had been worked out, would see the quarry workings expand in a westerly direction, taking in the former Torrey Canyon Quarry. Phase 2 would increase the quarry area to around 3.8 ha.

During the third and final phase the workings would be expanded laterally to the west to the design limit, taking in the remainder of the headland. It would also see the workings deepened below the -15m level created in Phases 1 and 2. Ronez says this phase is included in outline to show how the quarry could be developed into the longer term.