Chouet headland is an ideal place to develop a new quarry, according to Vale Senior Constable Richard Leale. 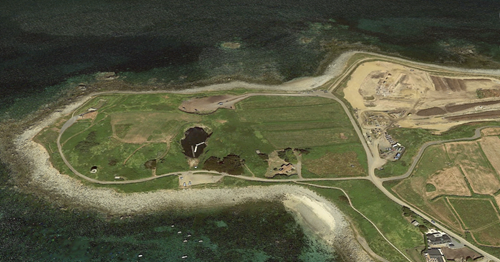 He was commenting in a personal capacity following Ronez’ announcement that it intends starting exploratory drilling there on Monday, 6 November.

That work will continue ongoing evaluation of the site’s potential and is essential to the future planning application, the company said. It’s announcement is available for download at the top of this page.

Recognising the strategic importance of quarrying to Guernsey, the area (pictured above) is designated by the States of Guernsey’s Island Development Plan as a mineral safeguarding area.

Responding to the plans, Mr Leale said he could see little objection to the proposals and understood that the quarrying company already owned the property adjacent to the site. He said there might be access issues for the model aeroplane fliers, who operate from the headland, but he questioned how many of them there actually were.

‘In theory, there’s nothing to stop them from operating from the cliffs at, say, Torteval and that would “spread the pain” of their activities a bit,’ he said.

Mr Leale understood the bunker at the headland was used to store explosives, so that could continue, and the small number of boats that moored in the bay would be able to remain there, although access might need to be restricted while blasting was in operation.

If the coastal path around the headland had to go on safety grounds - Ronez says in its statement above that it would be maintained - other coastal walks were readily available, he said.

‘To my mind, the more important question is in 10 years’ time when Ronez cease using Les Vardes quarry what will it be used for, as the Water Board no longer want it. That being so, it should certainly be filled in, using the island’s waste.’

In a reference to the new island refuse strategy, which has caused controversy in the parishes over cost and the way charges are to be collected, Mr Leale said that if suitably compacted rubbish was landfilled at Les Vardes, the facility would last for years and be a far more suitable disposal method than the current proposals.