A worrying increase in the amount of erosion at La Fontenelle Bay has been drawn to the attention of the Vale Douzaine by the Vale Commons Council, which manages L'Ancresse Common.

The problem has been illustrated by the council to highlight the issue and the images the VCC has prepared of the damage are reproduced below. The work indicates that in parts up to 15 metres (nearly 50ft) of coastline has been lost.

The council has taken this up with the Committee for the Environment and Infrastructure and the VCC has also asked the douzaine to bring this to the attention of parishioners through the Vale Parish website.

The VCC sent a letter earlier this year to parish Deputy Sarah Hansmann Rouxel regarding damage at La Fontenelle Bay (strictly Banque au Mouton but rarely called that), which she passed to committee president Deputy Brehaut, who replied in April.

The council says that in essence the three-page reply said a 'do nothing' policy has been adopted for the area, which is extensively used by walkers and people exercising their dogs.

The coastal defence work undertaken on behalf of the Island is led by expert analysis which assesses the risk of erosion and the potential impact on vital features such as housing, roads and services due to the loss of land and the ingress of the sea, the E&I Committee said.

La Fontenelle Bay was considered as part of the coastal studies last reviewed in 2009 by the company Royal Haskoning and the committee was unanimous in supporting the continuation of the existing approach to this section of the coast. Members felt that consideration should be given now to making an alteration to the coastal path, in view of the current proximity of the sea and the presence of adequate areas to the south to take a new route.

If the do nothing strategy was maintained the committee felt that by moving the coastal path inland this would avoid the future cost of repairs or rock armour protection in this location which will increase over the years as sea levels rise associated with climate change.

If parishioners have views on this, the Vale Douzaine and/or Vale Commons Council would be pleased to hear them and we can be contacted via [email protected]

Pictured below are the council's visuals of the extent of the erosion problem at La Fontenelle Bay area. Clicking on them will bring up a larger image. 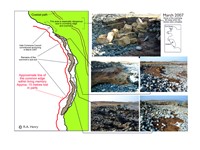 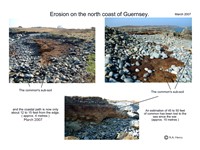 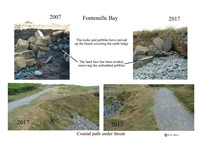 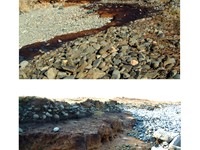 Presentation 1.jpg
Have something to contribute? Send us a message
Share This Page