Another 190 new homes could be built in the north of the island after the States bought the former data park off Route Militaire for nearly £5m in the hope it can get change of use from industrial zoning to housing. 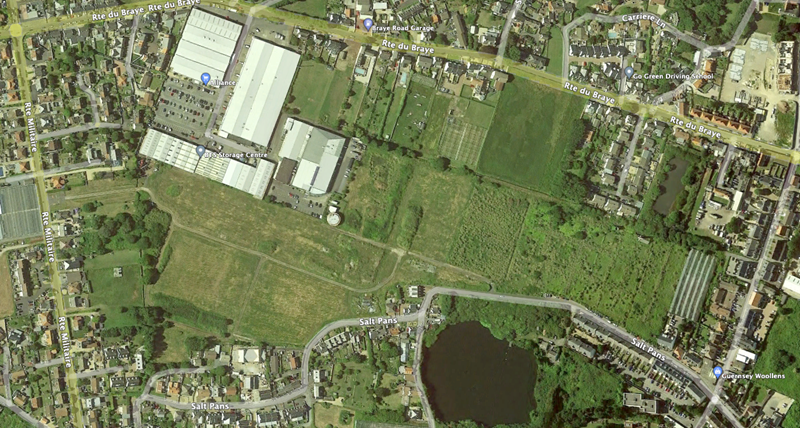 The Data Park site centre left with Kenilworth Vinery to the right, which is also being developed for new homes.

The site, which backs on to the former Kenilworth Vineries property, has been purchased by the Guernsey Housing Association with States backing. If permission is granted, it would see a total of 325 properties there, including the Kenilworth development.

Leale's Yard, to the east, could see a further 338 homes built, bringing the total of new builds in the Bridge "corridor" area to 663 – excluding a further 91 earmarked for Fontaine Vinery off St Clair Hill.

News of the speculative purchase of the business park – it has been called a calculated risk by the States committee responsible – was greeted cautiously by Vale Senior Constable Richard Leale. "The Douzaine is going to need far more detail about how this is going to work before it can comment comprehensively," he said.

"However, while we all acknowledge that the island needs more homes, especially for first time buyers, the States themselves are to blame for letting a shortage become an actual crisis, forcing them to take a £4.75m-pound gamble with taxpayers' money in this way.

Concerns
"Our concerns have been and remain about infrastructure and traffic. Embarking on a crash building programme is perhaps understandable, but the issues with traffic, already overloaded junctions, and no clarity on how the Bridge is to be reconfigured for the major development there, makes this a double gamble in my view."

He thought Vale Douzeniers would be reluctant to criticise the proposed developments out of hand but would be looking for compelling evidence from Planners about how the inevitable impacts of 754 new homes in a concentrated area were to be mitigated.

"This isn't remedied by a few extra bike racks and talk about active transport," he said. "This is an issue of how an extra 2,000 people can be accommodated in the North, get to and from work, go shopping and get their kids to school. They will need cars, parking and access to the road network, which is already deficient in this area.

"Where, we want to know, is the planning from government that shows how these real and worsening issues are to be resolved?"