Vale Senior Constable Richard Leale has reacted to the news that the Co-op believes it is now 'commercial suicide' to go ahead with developing the land it owns at the Bridge.

'I assume the group is unlikely to look at selling the site in the current market as they would presumably make a large loss,' he said.

'However, how about a public gesture to users of the Bridge in allowing the site to be used for car parking, or perhaps an open air market on a weekly basis?'

He added that part of the Leale's Yard site – despite sharing the same name he has no connection with it – could be made available for 'Fred in the Shed'-type activity, which used to happen there before the large-scale redevelopment was mooted many years ago.

'I think there is a case for asking the general public for suggestions that don't require large scale building there', he said. 'To leave it empty is a tremendous waste of a large resource.'

He added that the same comments could equally apply to the old Quayside building, which was daily becoming more dilapidated.

Below is the general development framework envisaged when Environment published an amendment to the mixed use redevelopment area (MURA) back in 2004. A larger version of the framework is available in our Gallery section, available here. 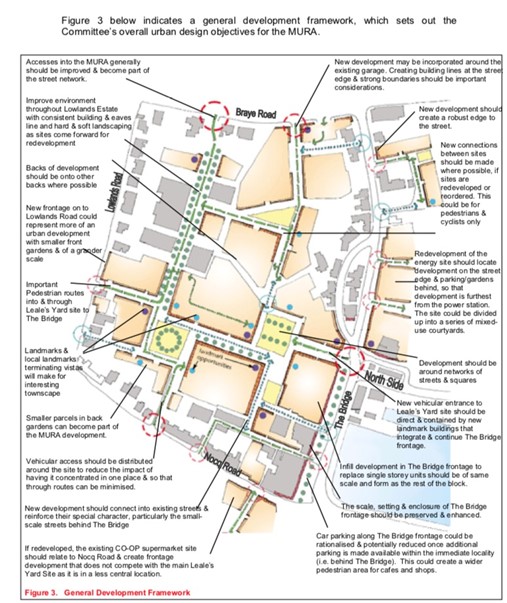