Vale parishioners who haven't chosen to use a postal ballot can go to the polls today and tomorrow in Guernsey's historic island-wide general election of people's deputies. 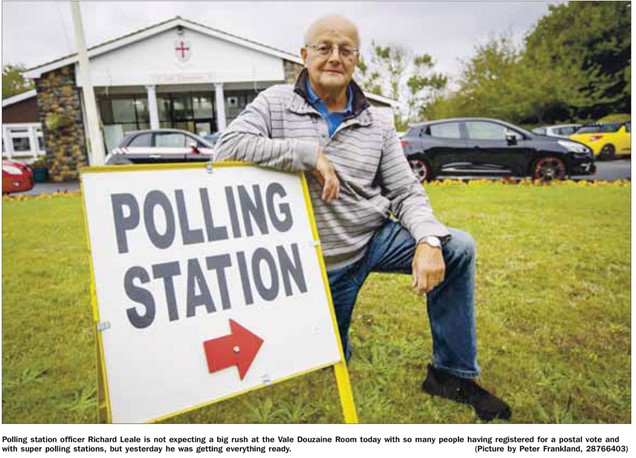 The Vale's polling station was featured in today's Guernsey Press and will be open until 8pm tonight and again from 8am tomorrow for people to choose up to 38 deputies from a field of 118.

Previous elections have seen the Rue Maraitaine Douzaine offices dealing with a steady stream of voters but Senior Constable Richard Leale (pictured) was not expecting a rush this election because so many islanders have elected for a postal vote instead.

Postal preference
Something like two-thirds of all those eligible to vote intend to do so by post, which means the remaining 10,000 or so electors will use either their parish polling station or at The Princess Royal Performing Arts Centre. Further details are available here.

Results are expected to be announced by the Bailiff later on Thursday after the counting process starts at 9am.

The Vale's polling station has 18 polling booths but Mr Leale said they did not anticipate being too busy, although they faced two long days, as a result of postal voting. "We're told that there are just under 2,000 for the Vale that haven't cast their vote yet but they could have gone to the 'super polling station' at the weekend, so no one really knows," he said.