Rousse gets a spruce-up

A significant pre-summer clear-up at Rousse has just been completed on behalf of the Vale Parish.

The Rousse Harbour Committee, in conjunction with the Constables and Douzaine, have removed abandoned boats, some of which have been there more than three years, old trailers and derelict fish boxes, after being unable to track down the owners.

The clearance was in response to complaints that the area was becoming an eyesore and that illegal fly tipping was occurring.

Senior Constable Richard Leale said the exercise was very expensive, not least because the States levies high charges on the disposal of GRP (glass-reinforced plastic) vessels.

‘In the end, we also cleared two skips-full of rubbish, mainly rusted and broken boat trailers,’ he said.

The work was paid for from the Parish Improvement Account and was actually carried out by mooring committee members over a couple of weekends.

The lay-up area for boats has been reduced in size and cordoned off with boulders so that the area can be better policed and more effective records maintained of who is leaving craft there.

‘As the committee cannot be present all the time, it is difficult to stop determined fly tippers,’ said Mr Leale.

Asked why Vale funds had been spent on the clearance, he said:

‘The land does not belong to the parish but comes under the control of Environment Department, who constantly cite a lack of money to be able to keep it clean and tidy.’

Pictured below is the area that has been cleared and the boulders placed to reduce the lay-up area. Also pictured is a boat for sale following the clearance and one that is there to be worked on. 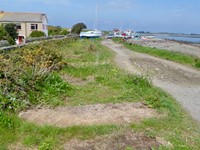 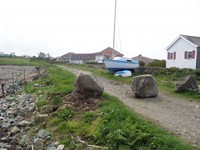 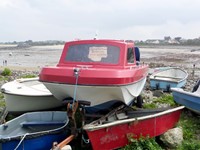 To be worked on.jpg
Have something to contribute? Send us a message
Share This Page