Vale Senior Constable Richard Leale has welcomed the latest rejection by planners of building homes on the "triangle field" opposite Alliance but said the matter raised some serious issues. 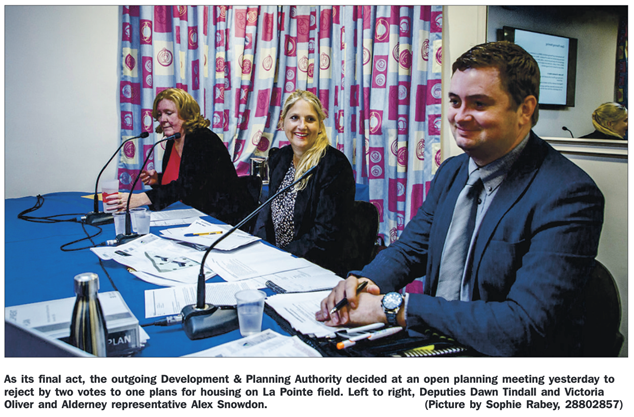 "I'm sure we all welcome the saving of a green field site in the parish as it's very good news for the Vale but we do have to question the way the decision was reached – and how sustainable it actually is," he said.

The deciding vote came from Alderney States member Alex Snowdon and Mr Leale said many would challenge the involvement of an Alderney politician in an exclusively Guernsey planning decision.

Really democratic?
"Yes, the outcome favoured those opposed to building at La Pointe [the field's official name] but how would people feel if an even more controversial decision was decided by someone who is unelected here?Mr Leale added that it should be borne in mind that no Guernsey deputy can be involved in Alderney planning decisions so, "Is this really democracy?"

The outcome was also notable because outgoing Development and Planning Authority president Deputy Dawn Tindall, who voted against the latest application to build two properties on the field, was a member of the DPA when it originally approved the site for housing.

"The site is already subject to an appeal against an earlier refusal to permit six homes being built there so we need to see the outcome of that," said Mr Leale. "La Pointe is becoming something of a political football in the wider context of how fit for purpose the island's planning laws actually are.

"It's very unfortunate that all this is being played out in the Vale when the pressing issue is developing Leale's Yard and resolving traffic and congestion issues."