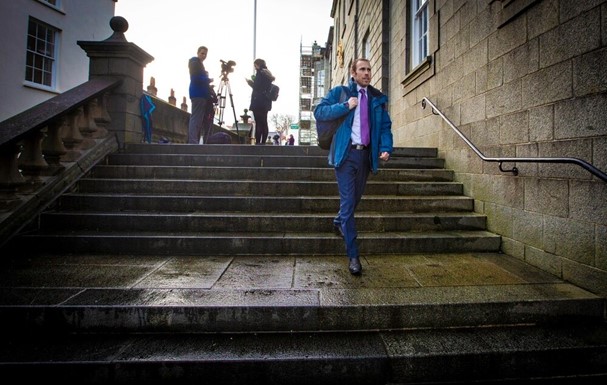 As previously announced, members of the Vale Douzaine on Monday spent a significant part of their regular monthly meeting considering proposals from Education, Sport & Culture (ESC) to reform education in Guernsey through the States-approved two-school model.

Members were well aware of the criticisms of the proposals and the strong views islanders and parishioners hold on the subject. Unsurprisingly, their own discussion and opinions expressed reflected this.

In debating what is clearly a significant and potentially divisive subject, members were informed by their own research and a number had attended the earlier public meeting on the proposals.

They had also discussed it with the parish deputies who, as is usual in the monthly forum, are invited to attend to answer douzeniers’ questions on a range of topics before withdrawing.

Grateful
The Vale Douzaine was particularly grateful that Vale Deputy Matt Fallaize, pictured above by the Guernsey Press, the president of ESC was also able to attend and respond to questions, concerns and comments from Douzeniers.

Following their private deliberations, the Douzaine, by a considerable majority, expressed the hope that Education would be able to continue working towards implementing the proposals without any further delay.

In reaching that conclusion, members were mindful that:

Objective view
Senior Constable Richard Leale said: “I recognise that many people will be disappointed that the Douzaine hasn’t come out and opposed the proposals, but members sought to look objectively at what the States has already approved, taking into account that the planning process should address concerns relating to the size of the school buildings and whether that’s adequate for the number of pupils, and the safety of the traffic proposals.

“In addition, a formal business case has to be made if the planning hurdles are cleared and Policy and Resources has indicated that, although it has delegated authority in this regard, it is likely to refer the final decision back to the Assembly.”

He added that although opposition appeared to be widespread, the Douzaine had not received significant feedback on it and concluded that the silent majority could be said to be  generally content for the current proposals to go ahead.

“Again, my own view is that it is the traffic issue, parking and ability to drop children at the school gates that has triggered this late-stage opposition  to  proposals required to implement the decision of the States following on from the States approval to end selection at 11.

“I also struggle to reconcile the large number of island schoolchildren who marched to try to persuade the States to declare a climate emergency with the current criticism – either by them or their parents – of school arrangements designed to encourage people to use polluting cars less.”