Vale's Douzaine has responded formally to the authorities over proposals to close permanently La Hougue Jehannet road, which runs along the back of Guernsey Electricity Ltd. 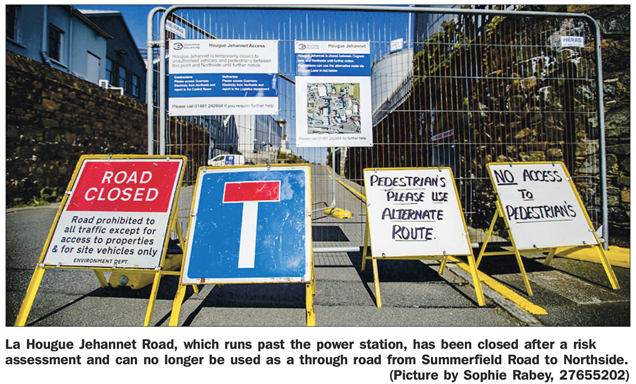 Senior Constable Richard Leale said members found it difficult to reach any firm conclusion on shutting the public thoroughfare in the absence of explicit information regarding the level of threat to the security of the power station.

That was despite contacting the States Trading Supervisory Board (STSB), Guernsey Electricity and the Committee for Home Affairs, which denied all knowledge or responsibility for the decision to instigate a report into the security risk.

"The Douzaine noted that since the temporary closure, the road has been continually accessible from the North Side end twenty-four hours a day with barriers closing only half the width of the road, presumably to allow staff easy access in their vehicles without the need to open a gate or remove a barrier. This leads one to the conclusion that the security threat cannot be very high," said Mr Leale in his response to STSB president Deputy Peter Ferbrache.

Thwarting opinion
Other reservations the Douzaine had included this being the third attempt by Guernsey Electricity (GEL) to obtain closure, but this time by sidestepping the usual process in law which would involve a public meeting on site.

"That is now being thwarted by going directly to the States," said Mr Leale, "in effect silencing the voice of the people in a democratic way without sufficient evidence being presented and hiding under the guise of security."

Just two parishioners had been in touch to support closure while 24 had written in opposing it, mainly on grounds of the extra traffic that would then use Le Hure Mare and Summerfield Roads, both of which are effectively single line roads due to parking.

Mr Leale said Douzeniers had also raised the issue of what recompense Guernsey Electricity would offer for incorporating the road into its property estate and inconveniencing the public.

"Therefore it is suggested that GEL hand over on a semi-permanent basis – assuming the road might return at some future date – a different area of land such as the temporary car park in Vale Avenue for public use. This would benefit shoppers on the Bridge and GEL would be able to park their staff cars in the taken over section of La Hougue Jehannet," he said.

GEL's view:
"The current temporary closure and potential permanent closure of Hougue Jehannet, is Guernsey Electricity’s direct response to changes in security risks," the company said in an email to the Vale website. "This is unrelated to previous measures to control access to the road. Our primary remit is to deliver a secure and reliable electricity supply to the island, and we must take action to mitigate against any risk to this service. While we would like to be fully transparent and share the details of the security reviews, this is simply not possible as they contain the details of current and future site security arrangements," said a spokesperson.

"There will be a planning application for the permanent closure, which will share again details of the multiple traffic impact assessments (which all conclude minimal traffic impacts), outline the more appropriate permanent road furniture and provide everyone with a formal consultation opportunity. The temporary measures are not ideal but do prevent access to the most critical infrastructure, and we are continuing to access how these temporary measures can be improved while a permanent solution is progressed."

GEL added that in the event of a permanent closure being agreed, the status of the road would be considered in consultation with States Property Services. "Irrespective of the outcome of these discussions, it will continue to be maintained as a highway to be used by Bucktrouts for their larger deliveries, as well as for GEL operational activities.

The suggestion of allowing public access to land on Vale Avenue for public use was a separate issue and not relevant to the security matter, said the spokesperson, but could be discussed separately.