The Vale has an abundance of history and tales from the Occupation years. To celebrate the 75th Anniversary of Liberation, a series of walks have been put together to discover some of the interesting places in the parish and their stories connected to the German Occupation. Each of the stops has its own information board giving you facts, photos and quiz questions for children. Simply view the correct stop’s board below on the website or save them directly to your phone to view whilst out on your walk. 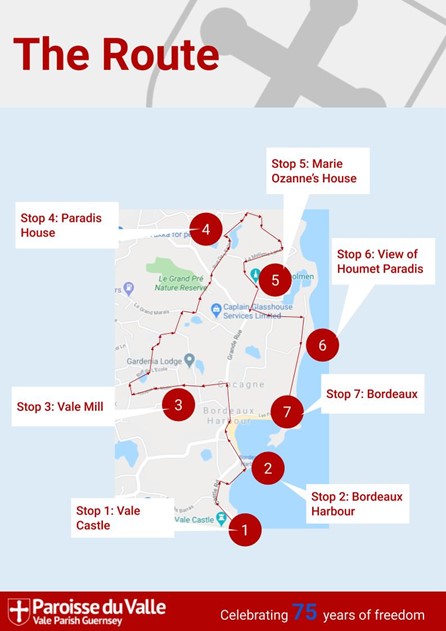 The Route
Starting at Vale Castle and ending at Bordeaux, this walk takes you to some of the Vale’s most well known buildings and fortifications, along with some lesser known locations too. On the way, discover the occupation history and stories behind them and the people who lived in the parish at the time.

Vale Castle to Bordeaux Harbour
The walk begins at the slope leading up to Vale Castle. (Stop 1) Here you can wander around the inside of the Castle before heading around the perimeter path which is surrounded by German fortifications. Head down the slope at the back of the castle. This brings you out on the pavement running along Castle Road. Cross over where the road meets a lane (Rue des Barras) and head straight through the gate opposite you to the pedestrian pathway. As you walk along this look to your left. At the back of the field is a hedgerow and you will notice that it gradually slopes downwards. This was the route of the German Light Railway during the occupation, built to move the equipment and materials needed for building fortifications. It would have run around Bordeaux to the beaches and quarries in the area. At the end of the path cross over to Bordeaux car park (where Woodies is located) and then walk towards the harbour area. (Stop 2)

Bordeaux Harbour to the Vale Mill ( Hougue du Moulin)
From Bordeaux, head along the road around the bay (with the beach on your right), joining the pavement that heads up the Rue du Bordeaux and take the second left lane (Les Grippios). As you walk up here you should pass Bordeaux Methodist Church on your left. Head up this lane until you reach the Vale Mill. (Stop 3)

Vale Mill to Paradis House (La Rue Des Paradis)
Head past the mill to where the road meets the Ville Es Pies. Turn right and then at the yellow line take another right. Follow the road, seeing the mill on your right hand side. Take the second lane on the left heading down Rue de Francais. Keep following this road and take the first right. Follow this and you will eventually meet a yellow line. Turn right here onto Le Grand Marais and then take the first left onto La Blanche Carriere. Follow this lane down to the end where it meets La Rochelle Road. Cross over carefully, turning left and then turn almost immediately right to up Rue De L'Epine (the lane opposite the former Dolphin Stores). Follow this road round, passing a large quarry on your right hand side. Soon after you will reach a junction where the road forks off in three. Take a sharp right, almost going back on yourself into La Rue De Paradis. Just down this road on the left hand side you will see Paradis House. (Stop 4)

Paradis to home of Marie Ozanne (Dehus Lane)
Carry on past Paradis and all of its granite cottages and take the first right into Rue Des Chapelles. This winding lane borders lots of fields. Keep following it until the end then take a right up La Miellette Lane. Head up this road and then take the first left. This is Dehus Lane (King's Road) and on the right hand side is a cream coloured house with a blue plaque. This was the home of Major Marie Ozanne of the Salvation Army. (Stop 5)

Home of Marie Ozanne to Les Croutes
Carry on past the house, following the lane. Around the first bend you will see the Dehus Dolmen. Follow the lane straight until you reach the yellow line at the bottom of the small hill. Take a left turn into Les Croûtes and follow this down to the coastal car park at the end. As you walk down that lane you will see the remains of some granite gabled greenhouses, dating back to 1914. Walk through the car park and join up to the coastal path that leads to Bordeaux. Here you have a good view of Houmet Paradis (Stop 6).

Les Croûtes to Bordeaux
Continue walking along the coastal path until you reach the other car park at Bordeaux (Stop 7) with great views of the bay and another small islet, Houmet Benest. This is where the walk concludes. 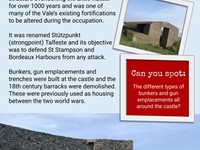 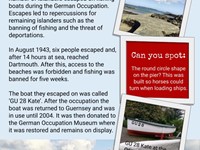 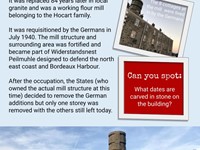 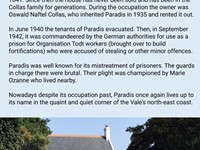 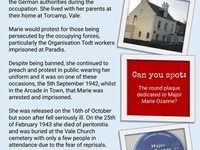 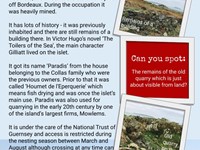 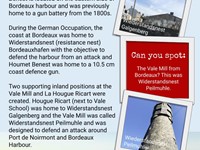 7. Bordeaux
Have something to contribute? Send us a message
Share This Page