Building on the controversial 'Triangle Field' opposite Alliance is probably all but inevitable, Vale's Senior Constable has said as he criticises States' silo mentality. 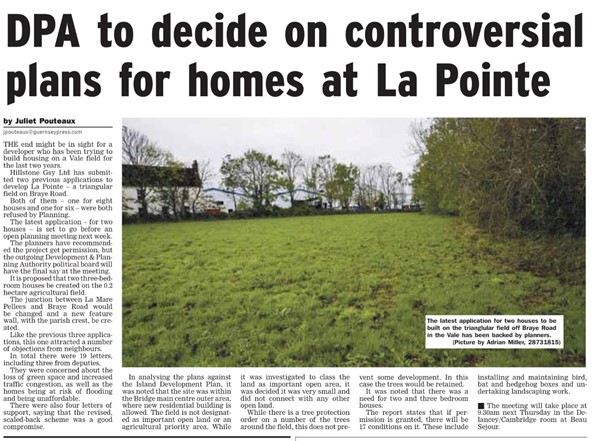 In an interview with the Guernsey Press Richard Leale said the "horse has already bolted" regarding the latest application to build on the site, which was previously used for pasturing horses.

Responding to an earlier news item (above) he said: "The Douzaine deeply regret the loss of another greenfield site. Unfortunately, the Douzaine, like the vast majority of the population, did not take enough notice of the 2016 IDP [Island Development Plan] and the States' SLUP [Strategic Land Use Plan] when this and other similar sites were earmarked as suitable for development."

Those being approved meant the value of the field dramatically increased due to the outline development opportunity and so became attractive to a developer, he said.

As a result – despite the issue going to an open planning meeting – the only remaining issue was exactly what would be built there.

Silo mentality
"We then had a typical example of how the States operate with silo mentality – one department giving development approval and another slapping a tree preservation order on the trees, making development very difficult," he said.

He predicted it would be another example of the professional planners arguing that the application fulfilled planning guidelines, thereby tying the hands of the deputies on the planning meeting adjudicating the application.

"We will end up with two properties being built that are out of the price range for the majority of the population," he said. "The possible ex-deputies will go away feeling they have done their bit in a fair and open fashion, the developer will be reasonably satisfied and the man in the street will be left wondering why he bothered."